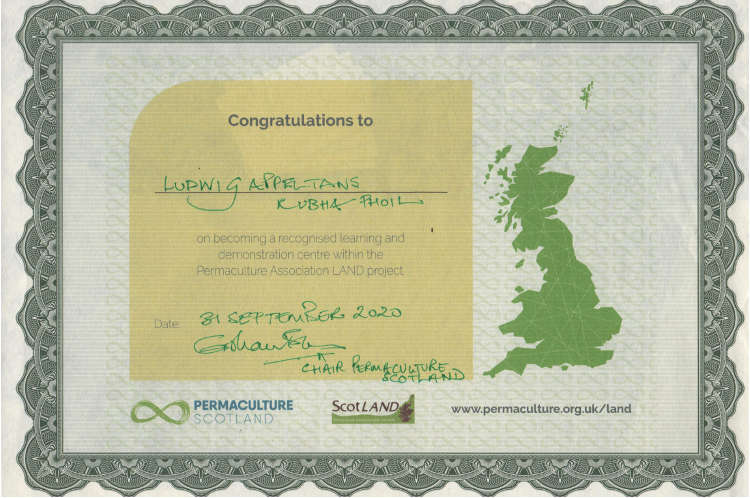 About the certification as a ScotLAND Center:

We are proud of this achievement:

Rubha Phoil is recognized as a Permaculture ScotLAND Demonstration Centre.

Why is this important?

But unlike with Organic, this is not enforced. If you call something organic and it isn’t you can get into legal trouble. With Permaculture, not so much. The ownership of the trademark lies with the founder of Permaculture: Bill Mollison (or more specifically with the people that inherited his estate when Bill became a legend and entered the afterlife.) Bill never seemed in favor of such a regulatory body to take action to enforce the correct use of the word. Which in any case is not really a difficult problem to solve: you create a badge of honor instead. Rather than spending energy on stopping a negative, promote a positive instead: ScotLAND CENTRES!

Thanks Graham and Ed!

Regardless of that discussion, it still leaves us, permaculturists, with the task to explain this message to the world. If you’d ask the average person, the terms permaculture brings up images like: harmony with nature, calm, health and well being, trees, hippie, birdsong, cups of tea, respect, mud, kindness, equality, peace, community, harmony, collaboration, food & nature etc…

Sadly, as the trademark is not enforced, anyone can use the word to try to greenwash their crimes, The label “Permaculture” is also an ideal undergrowth for people to hide and take advantage off. It is too easy to hide land abuse and people abuse practices under a green washed label of permaculture.

These are the three simple key ethical principles. Earth Care, People Care and Fair Share. These ethics are found in many traditional societies which have existed in relative balance with their environment for much longer than more recent civilizations.

Earth Care asks us to preserve the soil, keep the air and water clean, protect and enhance biodiversity, and conserve energy and natural resources.

Fair Share emphasizes equitable distribution of resources, networking and cooperation, reduction of consumerism, and rethinking notions of growth, progress and development. In the present and in the past. Honoring people that came before us, leaving a nice planet behind for the ones that come after us.

We can call it permaculture if we work towards helping at least one of the ethics and not negatively influence any of the 3. So it is part of the solution towards a permanent culture.

Remember, putting the label “permaculture” on something doesn’t make it permaculture.
Instead, ask yourself these questions:
– Do they look after the Earth?
– Are they kind to People?
– Do they Share the surplus?

Here are the answers for the example of the Rubha Phoil Community and Virtual Village:
Ludwig is a member of PAB, has completed his PDC with Patrick Whitefield in 2009. Ludwig’s reviews are here. Ludwig is a registered teacher allowed to certify permaculturists. He has taught 9 PDC’s already, has certified more than 60 students and taught many other courses. Ludwig doesn’t have his diploma, yet. He registered for the process to obtain it, but this is not a high priority for him as he doesn’t need it to be able to teach and write certificates due to his extensive experience in teaching before this rule came into being. (The diploma was created to give fresh recruits a clear pathway to gain a recognizable amount of experience in permaculture design before they were allowed to certify the next generation of permaculturists. Ludwig already was allowed to certify due to having enough prior experience. ) His diploma project is be the permaculture design of Rubha Phoil.

Now Rubha Phoil is a ScotLAND Permaculture Demonstration site too!

Check your sources before you believe labels! In these trumpian times now more than ever. And I hope that you have discovered that maybe you are already doing things that you can call permaculture. Join our Virtual Village if you want to learn more.

About the withdrawal from ScotLAND Centre: 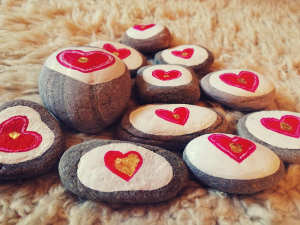